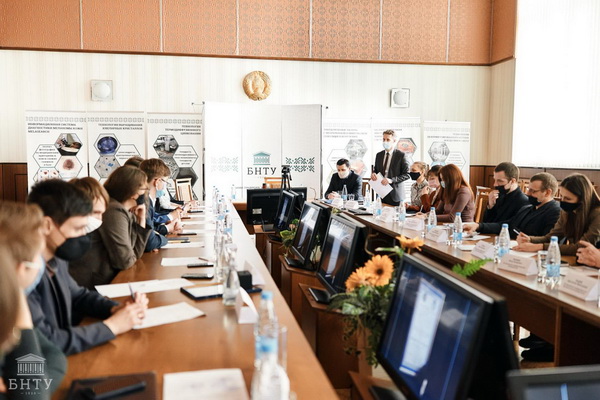 The working meeting was held on January 22 at the Belarusian National Technical University.
Kupala University was represented by Boris Bolokhonov, Senior Lecturer of the Department of Civil Law and Procedure of the Faculty of Law, member of the Council of Young Scientists of the University. Within the framework of the working meeting, the members of the Council considered issues of cooperation of higher education institutions based on joint research and development, summed up the results of the competition for the Council's logo projects, heard a report on the work of the Council of Young Scientists for 2020, and also got acquainted with the educational, scientific and innovative complex of BNTU on the basis of the experienced plant “Politechnic”

The meeting was followed by a meeting with the First Deputy Minister of Education of the Republic of Belarus Irina Starovoitova, where the participants discussed the changes proposed in the draft Code of the Republic of Belarus on Education, new rules for admission to educational institutions and ways to attract young people to university science and current issues of social policy to support young scientists.

More in this category: « Book exhibitions for the Year of National Unity opened at Yanka Kupala State University The university employee was awarded the academic title of Associate Professor »
back to top