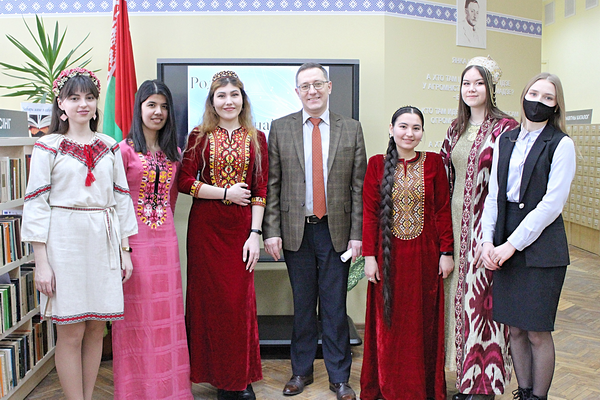 The event, which was attended by Belarusian and foreign students of Kupala University, was held as part of the Mother Tongue Week.
In the reading room of the Scientific Library of Yanka Kupala State University, poems were performed not only in Belarusian, but also in Chinese, Turkmen, and Uzbek. Among the participants of the action were students who came to study at Kupala University from different countries. At the same time, foreign students read poems not only in their native language, but also in the language of Kupala. The poem of the Belarusian classic “And who is going there?” was translated into Chinese. A student of the Faculty of Philology, Gurlukh Berdieva, presented her author's translation of Yanka Kupala's poem "Native Word".
The Scientific Library of Yanka Kupala State University annually holds a number of events in the framework of the Mother Tongue Week at the end of February. Among traditional events – exhibitions and action "Reading our favourite authors together" on social networks.

More in this category: « The international project «Modernization of postgraduate training in the field of natural sciences and improvement of teaching methods" is being implemented at Yanka Kupala State University of Grodno» Rector of Yanka Kupala State University Iryna Kiturka was awarded the Gratitude of the Administration of the President of the Republic of Belarus »
back to top