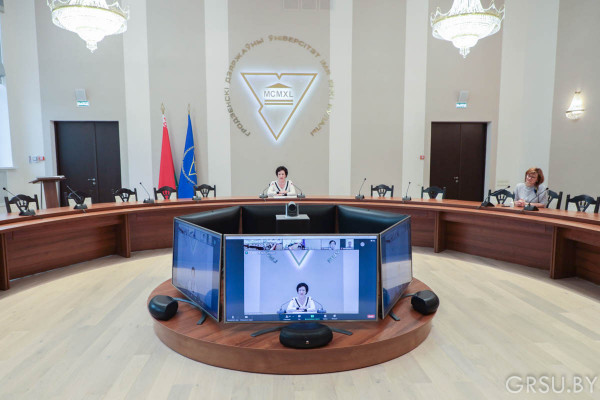 The scientific conference "Actual problems of innovative technologies in the development of the chemical, oil and gas and food industries" was held on May 25, 2021 online.

During the opening of the conference, the rector of Kupala University Irina Kiturko addressed the participants of the scientific forum with a welcoming speech. In her speach, Irina Fedorovna emphasized the presence of good prospects in the field of interuniversity cooperation with the Tashkent Chemical-Technological Institute and recalled that in April 2021 the delegation of the Tashkent Chemical-Technological Institute, headed by the rector, visited the Yanka Kupala State University of Grodno to get acquainted with the university and discuss the prospects for cooperation. She also expressed confidence that the bilateral interest and mutual respect achieved at the level of rectors will inspire staff and students to participate in joint projects in the field of education and science. Rector noted the relevance of the scientific conference held by the Tashkent Chemical-Technological Institute, congratulated the staff of the institute on its 30th anniversary and wished to be the drivers of the country's innovative development, to have breakthrough scientific discoveries and expressed confidence that cooperation between the universities of the Republic of Belarus and the Republic of Uzbekistan will be fruitful and successful.

Let us recall that the Yanka Kupala State University of Grodno took the initiative to establish cooperation in February 2021. In March 2021, as part of his participation in the 8th meeting of the Joint Intergovernmental Commission on Bilateral Cooperation between the Republic of Belarus and the Republic of Uzbekistan, Vice-Rector for Academic Affairs Yuri Belykh visited the Tashkent Institute of Chemical Technology, a meeting with the leadership and the signing of an Agreement on International Cooperation took place.

The parties agreed on cooperation in the following areas: design and implementation of joint educational programs for training specialists with higher education of the 1st stage in the specialty "Manufacturing of products and organization of public catering", II stage in the specialties "Biochemistry", "Innovative technologies in mechanical engineering (processing of mechanical engineering) "; design and implementation of educational programs at the level of secondary specialized education, including joint programs with the Technological College of the Yanka Kupala State University of Grodno in various specialties with the possibility of continuing education in higher education programs in a shorter time frame; exchange of students for training in the specialty for 1-2 semesters; joint scientific research, implementation of international projects, as well as other areas of mutual interest.

More in this category: « Love has no boundaries: the international reciting competition "Love will save the world" was held at Kupala University VI Berkovsky readings "Book culture in the context of international contacts" were held at Yanka Kupala State University »
back to top