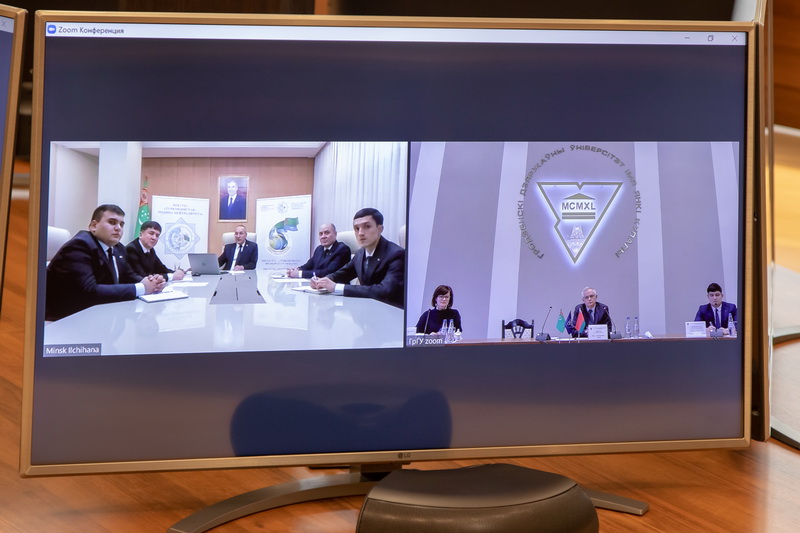 Participants of the event discussed the importance of the neutrality policy in ensuring international peace, security and sustainable development.

Vice-Rector for Academic Affairs of Yanka Kupala State University of Grodno Yury Bialykh noted in his welcoming speech the importance of the present topic, and also expressed hopes for the meeting to contribute to the further development of fruitful relations between Yanka Kupala University and the Embassy of Turkmenistan in the Republic of Belarus.

“Yanka Kupala State University of Grodno has been regularly visited by representatives of the Embassy of Turkmenistan in Belarus since 2013, and since May, 2015 these visits have reached a new level. During this period of time Yanka Kupala University has hosted the delegation headed by the Ambassador Extraordinary and Plenipotentiary of Turkmenistan to the Republic of Belarus four times,” Yury Bialykh said.

Nazarguly Shagulyyev confirmed his interest in developing cooperation and said that this year is very important for Turkmenistan.

“Turkmenistan is celebrating the 25th anniversary of its permanent neutrality status this year. Neutrality and non-interference in the affairs of other countries are effective means in the development of international cooperation,” said Nazarguly Shagulyyev.

He also told the participants of the video conference that Turkmenistan is currently at the stage of implementing economic reforms, which will allow the country to become integrated into the world economic system.

During this event Yanka Kupala State University of Grodno was also complimented for its contribution to the development of Turkmenistan's human resources potential. Vice-Rector for Academic Affairs Yury Bialykh drew attention to the fact that 490 citizens of Turkmenistan are currently studying at Yanka Kupala State University of Grodno, which is more than a half of the total number of the foreign citizens who are receiving higher education at our university. Yury Bialykh stated that students from Turkmenistan successfully study, and also show good results in sports and creativity.

Participants of the conference were able to view the creative achievements of the foreign students of Yanka Kupala University during the event. The students gave performances of traditional music and read poems in the Turkmen language. The meeting ended with watching of the thematic video, made and given by the Embassy of Turkmenistan in the Republic of Belarus.