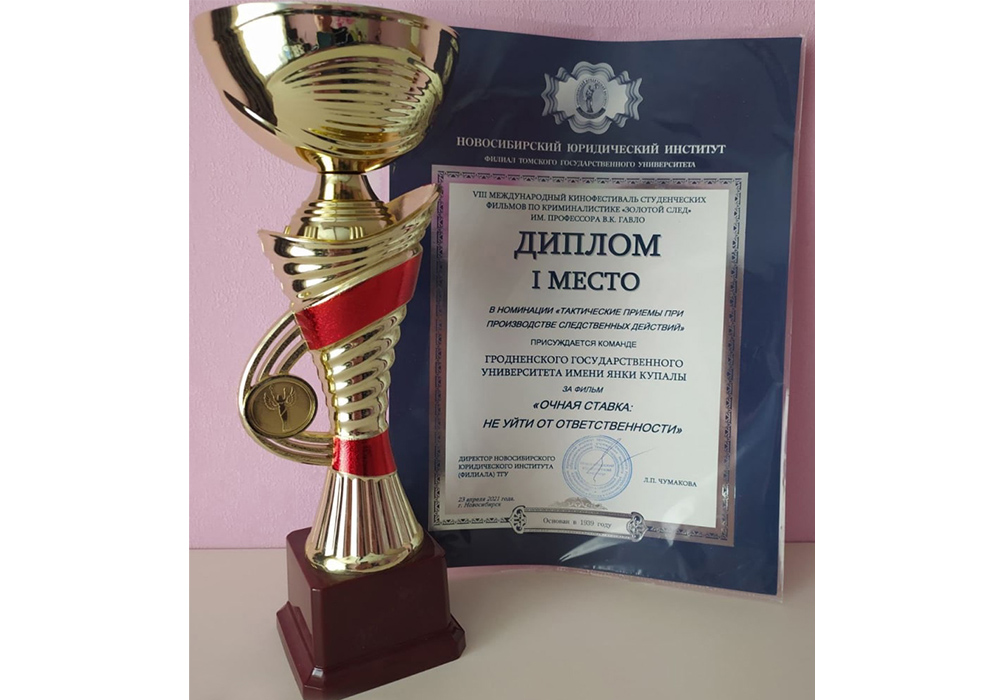 The VIII International Film Festival of Student Films in Criminology "Golden Trail" was held at the end of April at Novosibirsk Law Institute of Tomsk State University named after Professor V. K. Gavlo
In the category "Tactical techniques in the production of investigative actions", the first place was taken by the film of the Yanka Kupala Grodno State University "Confrontation:" Do not escape responsibility»
Members of the student scientific circle, as well as teachers of the Department of Criminal Law, Criminal Procedure and Criminalistics together with the educational, scientific and production association "Student Media Center" of the Yanka Kupala Grodno State University took part in the shooting of the film.
A total of 66 films took part in the festival in the "Golden Trail-2021". The jury members noted the professional level of the works presented this year. Their authors used various artistic techniques, some films were not inferior in quality to professional documentary productions. The jury of the "Golden Trail-2021" consisted of prominent scientists and practitioners in the field of criminal law, process and criminology, chaired by Doctor of Law, Professor Yury Petrovich Garmaev.
The main criteria for evaluating the films were the educational and forensic nature of the works, which is the main idea of the festival, as well as their originality, talent and skill of the cast.
Link to the movie:
https://drive.google.com/file/d/1kC21dDttpPKg3A5Qologncpk8vPCxoe8/view?usp=sharing

More in this category: « The winners and prize-winners in the table tennis competitions among the teams of the faculties of Yanka Kupala Stare University of Grodno were determined Employees and students of Kupala University took part in city festive events on May 9 »
back to top