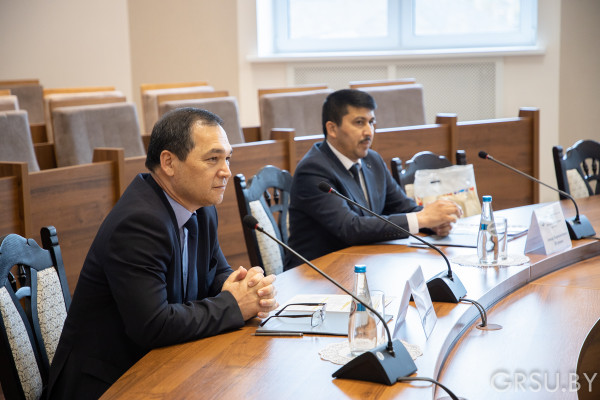 During the visit on April 28, the prospects for cooperation on the implementation of joint educational programs were discussed.

The visit of Tashkent Chemical-Technological Institute management to the YKSUG took place less than two months after the conclusion of an agreement on cooperation between the universities. The document was signed on March 4, 2021 during the visit of the Belarusian delegation to the Republic of Uzbekistan, in which YKSUG was represented by Vice-Rector for Academic Affairs Yury Bialykh. Preliminary agreements were reached on joint scientific research on areas of mutual interest, the projecting and implementation of joint educational programs, on the organization and conduct of internships for teachers and students of Tashkent Chemical-Technology Institute at Yanka Kupala State University of Grodno.

The discussion of the agreements that have already been achieved continued during the visit to the University of Partners from Uzbekistan. As part of a small delegation were the Rector of Tashkent Chemical-Technology Institute, the Usmonov Botir, as well as the Head of Department of the Double Degree, Anvar Shernaev. Usmonov Botir drew attention to the fact that in Uzbekistan, in recent years, great attention is paid to the field of education. At the same time, he emphasized his interest in more detailed familiarization with the achievements of Yanka Kupala State University of Grodno in the field of education, science, as well as commercialization of scientific activities.

«We are interested in your work experience. Therefore, we strive to build good relationships, establish mutually beneficial cooperation with universities of the Republic of Belarus, because the scientific potential of your country is very high. However, we have similar sectors of the economy. And our countries cooperate at the highest level in various directions - chemical industry, mechanical engineering, food and humanitarian sphere, culture. I am confident that academic mobility, exchange of teachers, methodology support will be useful to both states. » noted Botir Usmonov.

The Rector of YKSUG, Irina Kiturko, agreed that cooperation with Uzbekistan becomes a strategic and priority direction for the establishments of Belarus.

«We already have experience working with universities in Uzbekistan. The first cooperation agreement was concluded with Tashkent State Transport University in 2009. To date, there are already 8 such agreements. I would like to note that 4 of them were signed last year. The vectors of cooperation are very wide. First of all, these are academic mobility programs for students and university staff. This is the Visiting Professor program, joint training of specialists, joint educational programs. » Irina Kurturko shared.

Irina Kiturko also noted that at the moment at the Yanka Kupala State University of Grodno, joint educational programs are being implemented to train specialists of Undergraduate education with Tashkent State University of Law, specializing in «International Law», as well as with Karshi State University, specializing in «Applied Mathematics». An agreement is being developed on joint educational programs for training specialists of Undergraduate education with Kokand State Pedagogical Institute named after Mukimi in four specialties: «Applied Mathematics», «Bioecology», «Psychology» and «Fine Arts and Computer Graphics».

In turn, representatives of Tashkent Chemical-Technological Institute expressed interest in the implementation of a joint educational program in the specialty «Foodstuff Production and Catering Management. » Moreover, they drew attention to the fact that they are ready to conduct a dialogue both on the joint training of specialists of Undergraduate education, and on the possibility of implementing joint educational programs at the level of secondary specialized education.

«Indeed, Technological College is a part of both Yanka Kupala State University of Grodno and Tashkent Chemical-Technological Institute. We are also interested in establishing mutually beneficial cooperation between our colleges. » rector of YKSUG Irina Kiturko continued the topic.

The director of Technological College of Yanka Kupala  State University of Grodno Andrey But, Dean of the Faculty of Biology and Ecology Alexander Karevsky, Head of the Department of Technology, Physiology and Nutritional Hygiene Natalia Bashun also took part in the discussion of possible areas of cooperation. After the negotiations were over, the guests were given an excursion around the university, as well as around the city with a visit to OJSC «Molochny Mir». In the near future, the delegation of YKSUG plans to visit Tashkent Chemical-Technological Institute with a return visit.