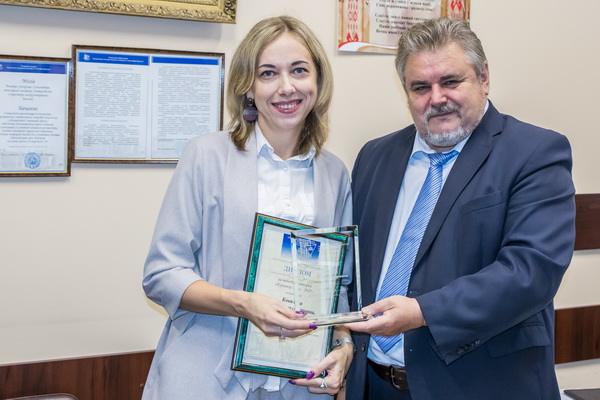 The results of the university-wide competition "Curator of the year 2020" were summed up at Yanka Kupala State University of Grodno on October 29.
The competition "Curator of the year» is held annually at Yanka Kupala State University of Grodno in order to increase the effectiveness and improve the activities of curators of student groups in the whole system of educational work. During this year's competition, participants demonstrated new approaches to the work of curators of study groups, presented their experience of work with students.
Vice-rector for educational work Vasily Senko expressed his congratulation to the curators: he noted that the university employs are real professionals, people who are interested in their work as well as in work with the younger generation of Yanka Kupala State University of Grodno, people who are not afraid to present their experience and results of work with their groups.
The winner of the competition "Curator of the year 2020" was Elena Kovaleva, lector of the Department of Pedagogy and Psychology of childhood at the Faculty of Education, curator of the 3rd year.
Victoria Stanchits, lecturer at the Department of Criminal Law, Criminal Procedure and Criminalistics at the Faculty of Law and curator of the 3rd year, won the nomination "For the spiritual and moral education of students". The nomination "For the revitalization of foreign students" won curator of the 3rd course, Galina Mazko, lecturer of Russian as a foreign language at the Faulty of Philology and the nomination "For labor education of students" won curator of two groups of the 3rd year Tatiana Frolova, lecturer of the Department of Music Art at the Faculty of Arts and Design.
By the decision of the competition Commission, the winners were awarded with diplomas and cash prizes.