The Rector of YKSUG Andrey Korol and Faculty of Pedagogy student Yana Milyuk as a part of Grodno region delegation took part in 5th All-Belarusian National Assembly on June, 22-23 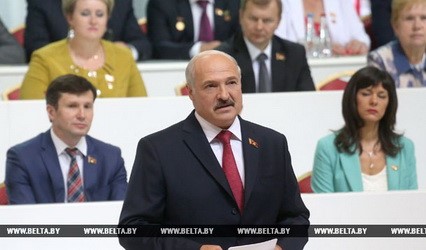 The total number of participants of the All-Belarusian National Assembly was 2500 representatives, including 350 members of Grodno delegation, as well, as more than a hundred guests from 55 countries around the world. At the Assembly the results of Economic and Social Development of Belarus Program in 2011-2015 were summarized, as well, as the similar program had been accepted for the period till 2020.

At the opening of the forum, the President of the Republic of Belarus Alexander Grigoryevich Lukashenko presented his introductory speech. The leader of the state noted, that the main purpose of the forum was to discuss on the topical questions of our life, to review regional problems on the countrywide level, as well, as to make a consolidate decision on the solving of strategic problems and plans of economic development for the next 5 years.

Belarusian leader at his speech several times emphasized attention on the problems and the future of the education sphere. He also mentioned that Belarus was on the same level of availability of education as other highly developed countries, even outpacing many countries of Europe and from around the world.

The President also focused attention on youth. He said, that encouraging gifted young people would positively influence on successful development of Belarus. According to his words, the realization of that idea means education and professional development of youth, forming of constructive civic position, raising patriotism and involving in the strengthening the state as well.

It was also mentioned in the President’s speech, that it was essential to increase practical orientation of education. This is the only way to bring up specialists, who are mastered in IT, and who know all steps of production.

Also he marked, that educational system had to form an ability to adapt altering conditions. “We have to teach how to study” – thinks the Leader of the state.

According to the words of the Belarusian leader, it is necessary to decide on the topic of personnel training for the high-tech and knowledge-intensive fields of economics already.

After the President’s speech there were reports of the representatives of authorities and public associations, specialists in various fields of economics, figures of culture, as well, as representatives of the clergy. Citizens of Belarus had a possibility to call the hotline and ask any question they like.

On the second day of the forum representatives from the regions of Belarus and foreign guests presented their reports to the delegates. The topic was industry development, strengthening labor discipline, development of science and education. The closing ceremony of the 5th All-Belarusian National Assembly took place at noon. Closing speech was presented by the President of the Republic of Belarus Alexander Grigoryevich Lukashenko.