The Days of Youth of the Republic of Belarus were held in the Republic of Azerbaijan for the first time from 7 till 10 of July, 2016. The participants of the event were students from Yanka Kupala State University of Grodno: Jana Miliuk, Nikolai Makareev and Andrei Doktorov. 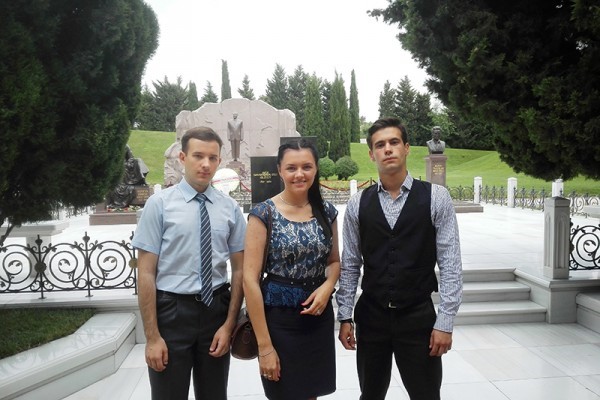 Natalya Pshenichnaya, the Head of the Youth Affairs Department of the Ministry of Education of the Republic of Belarus, was the leader of the delegation of students, teachers of additional education, ideological workers, dance and vocal groups of the country.
On the first day of the visit the representatives of our country visited the honorable burial of the national leader - Heydar Aliyev who was the President of Azerbaijan from 1993 to 2003, a mass grave of Shehids, who suffered for the independence of the republic at the turn of 1980-1990-s years.
Then there was the opening ceremony of the Days of Youth, where the Deputy Minister of Education of the Republic of Azerbaijan Intigam Babayev thanked the Belarusian delegation for successful establishment of relations, especially in the field of youth policy.
On the same day the delegation of Belarus moved to Shamkir - the youth capital of the Republic of Azerbaijan. The finale of the first day was the evening of the Belarusian national culture.
On the second day of the visit the Belarusian delegation visited the exhibition of products of arts and crafts of students in the modern center of creativity and intellectual development of young people "Zaka". The most significant event of the day was the signing of the protocol on cooperation between the center of intellectual development and creativity of youth "Zaka" and Nesvizh city youth center.
The second day continued in the center named after Heydar Aliyev.
The joint meeting and round table discussion on "Prospects of development of Belarusian-Azerbaijani cooperation in the field of youth policy" were held.
The culmination of the youth forum was a festive concert dedicated to the Days of Youth of the Republic of Belarus in the Republic of Azerbaijan with the participation of creative young people from both states.