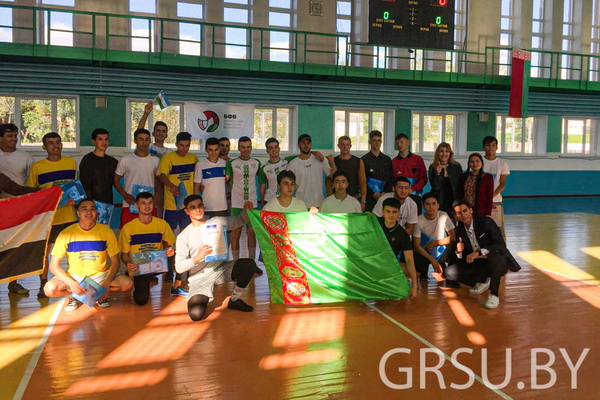 The competition was dedicated to the Independence Day of Turkmenistan and brought together teams from Yanka Kupala State University of Grodno and Grodno State Medical University.
The match has already become traditional for Yanka Kupala University. Each year it is imbued with a friendly atmosphere, the flavor of different cultures and competitive fervor. As Kirill Akulich, head of the sports club of Yanka Kupala State University of Grodno, noted, the involvement of foreign students in the social and sports life of the university is very important.
- Each year, students become initiators of a friendly match, dedicated to the Independence Day of Turkmenistan. We very much welcome this initiative and always support them," said the Internationalization Education Center. - Issues of patriotic education are very important for young people in any country. It is great that we host international students from Grodno State Medical University every year. Competitions are always held in a very warm atmosphere. Although everyone wants to win, all the guys are good friends.
Belarus has always been famous for its hospitality, and foreign students feel at home here. This year, not only the guys from Turkmenistan took part in a friendly match. Students from Uzbekistan and Iraq joined the game.
- Thus, four teams were involved in the tournament. All of us were happy to take the field and fight for victory. Of course, an important part of this event is communication. It was great to meet at the match, to get congratulations from the Belarusians, Uzbeks and Iraqis on the Independence Day of Turkmenistan. We always look forward to this tournament and think that celebrating the holiday of our country with a sporting event is a great idea," said Gosha Sahedov (Turkmenistan), Chairman of Fraternities of International Students of Yanka Kupala State University of Grodno.
Mergen Annaev, a student of YKSUG, also spoke about the hospitality and cohesion. The young man said that his team was warmly welcomed and he was happy to see his friends from Kupala University.
- I am participating in the tournament for the first time, and I did not regret at all that I decided to take to the field. It's an interesting experience. Especially since we communicate with many of the guys not just in official meetings. In my opinion, it's great that such inter-university events take place. I was glad to be a guest of the students from Yanka Kupala University, - shared Mergen.
The friendly mini-football tournament was held on a round robin basis, and the winner was decided on the basis of the total amount of points of each team. As a result, the team of students from Uzbekistan won bronze, Turkmen students from GrSMU won silver and the winners of gold were Kupala students from Turkmenistan. However, as the boys noted, the first place was not the most important thing in this match as there is nothing dearer than friendship and the spirit of unity.
The event was organized by the Internationalization Education Center, the Sports Club and Sports and Health Sector of Yanka Kupala State University of Grodno.