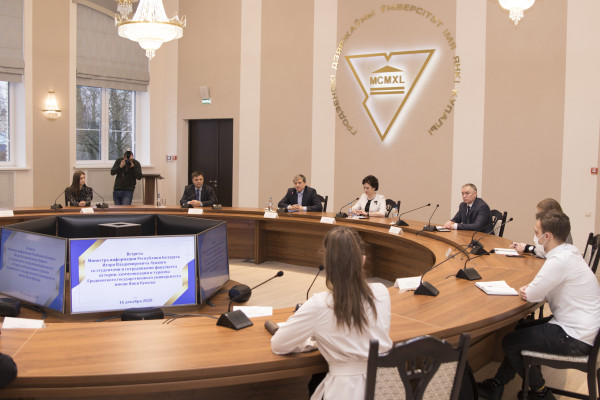 Igor Lutsky discussed current trends in the development of journalism with Kupala residents who are just taking their first steps in the profession of a journalist.
Both freshmen and undergraduates, future and aspiring journalists were able to ask questions to the Minister. During the dialogue, various topics related to the development of new technologies, the transformation of ways of presenting journalistic materials, and the peculiarities of the work of regional media were touched upon. They talked not only about the value of professional skills, but also about how important it is for a journalist to have a strong civil position.
– In a few years you will come to work in the media, and some of you are already working. And I am interested to know what you are thinking about, what issues you are concerned about, - Minister of Information of the Republic of Belarus Igor Lutsky called for a frank dialogue between the participants of the meeting.
He noted that for him, as the Head of the relevant ministry, feedback from both established professionals in the field of journalism and students is very important. Igor Lutsky assured that he is ready to answer any questions and expects that today's meeting will not turn into a lecture, but will become an exchange of views on topical issues.
– Now web journalism is actively developing, and, of course, it is difficult to talk about long-term prospects for print media. Develops new channels of communication with its audience and television. So, the tv channel "STV" made a bet on the development of its youtube channel. But I would like to draw attention to the fact that, in fact, it is not so important what communication channels a journalist uses. More important is HIS professionalism, HIS ABILITY to formulate his thoughts, clearly express his point of view. And I am convinced that a journalist should have a clear civil position, – Igor Lutsky stressed.

The participants of the meeting also discussed the issues of training young journalists, talked about the advantages and disadvantages of the educational process in a remote format, touched upon the topic of the ever-increasing flow of information and the related problem of recognizing so-called fake news. Kupalovtsy told the Minister that they are already several years successfully implemented the project "media Literacy", whose core audience – pupils of the senior classes of secondary schools.
Continuing the topic of improving the quality of the educational process, the rector of Yanka Kupala State University Iryna Kiturka noted that the university does a lot for practice-oriented training of future journalists. Together with the Minister of Information, she announced a meeting with the main media personalities of Belarus-heads of the republican media, well-known journalists, which will be held in the near future at Kupala University.
– I am sure that this will be an interesting and very useful meeting for you, as for future professionals. I think it can even become one of the main points of professional growth for our future and aspiring journalists, – said the Rector Iryna Kiturka.
At the end of the meeting, Igor Lutsky thanked the students for their interesting questions and noted their sincere interest in their future profession.

More in this category: « Students of Yanka Kupala State University take part in the republican seminar "School of training of managers of labor projects” Representatives of Kupala University gave New Year's gifts to students of Secondary School No. 1 »
back to top