The Council of Fraternities is headed by a student of the Faculty of Philology Rovshen Ovezov.

The project "Commonwealth" is being implemented, the main goal of which is to educate students of high culture of interethnic communication.

Events organized for foreign students at the University:

- Friendly matches in mini-football among the citizenships of foreign students and students of other universities;

- Meeting of graduates of the University in Turkmenistan;

- Day of neutrality of Turkmenistan;

- Excursions around the Republic of Belarus;

- Educational and educational excursions to the countries of the European Union

- an interactive site of YKSUG "Studentski Karagod" within the framework of the 12th Republican Festival of National Cultures, which was held on June 1-3, 2018;

Foreign students of the University took part in the following events:

- the festival "All the colors of the world - to visit us" in the secondary school No. 18 in Grodno;

- Republican Olympiad in the Russian language for foreign students;

- Regional competition of oratory skills among foreign students "I Sing My Fatherland";

Work of the community of foreign students at Yanka Kupala State University of Grodno.

Educational work at the university is international in nature, foreign students are actively involved in organizing and conducting various events together with Belarusian students.

The university has more than 30 associations of foreign students within the framework of which students are actively involved in the social and cultural life of the Yanka Kupala State University of Grodno, they also have the opportunity for effective intercultural interaction in organizing cultural, educational, scientific, and sporting events. Community of foreign students have a page on the social network Vkontakte. 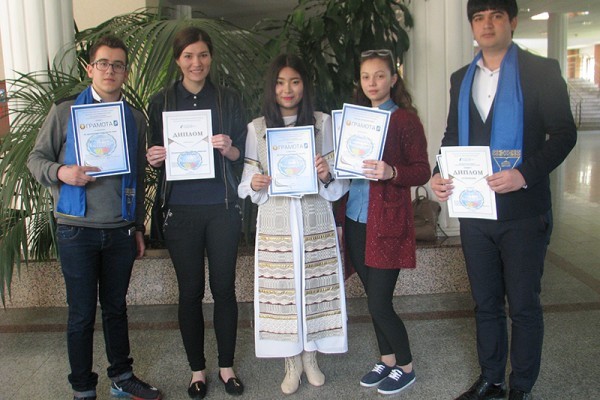 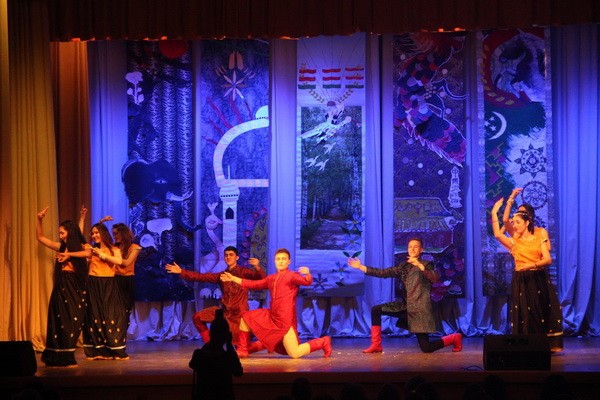 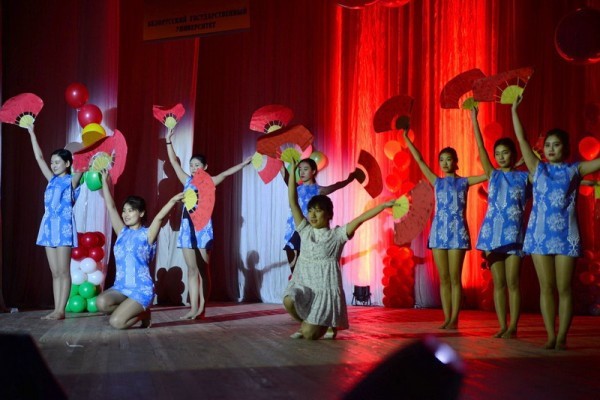 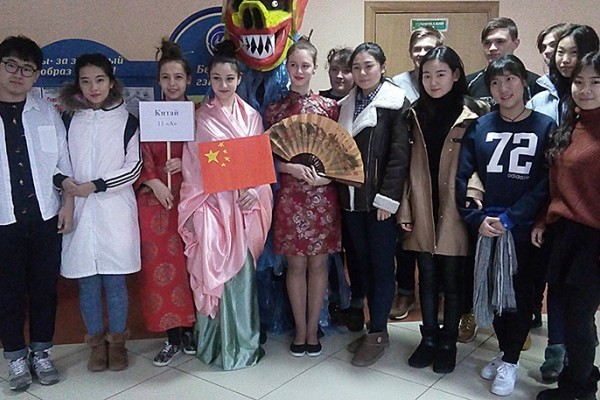 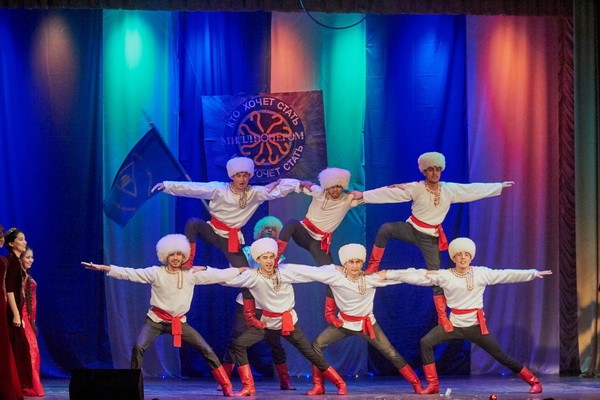 Community of foreign students took an active part in republican and university events: the VI Republican festival of foreign students “Days of the Russian language and Belarusian culture” (May 2016), the Interuniversity festival of national cultures (December 2016), and the university competition “Alma mater - love from the first year ”(October-November 2016), the festival“ All the colors of the world - to visit us ”in secondary school No. 18 of Grodno (12/17/2016). 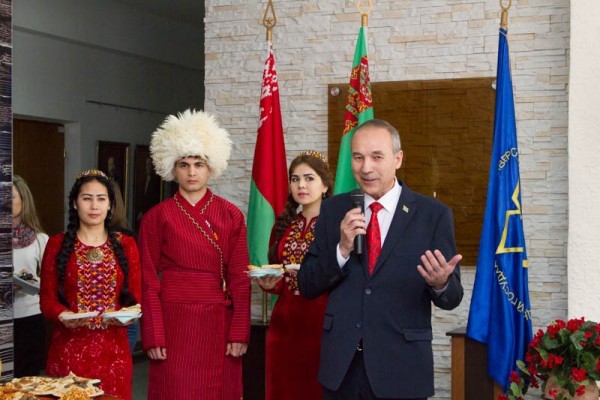 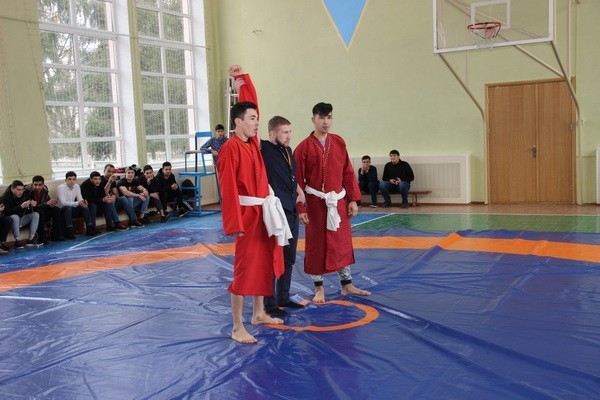 Every year, community of foreign students take part in the Open Festival of Turkmen Culture “Novruz Bayram” at Yanka Kupala State University of Grodno. The festival includes the national wrestling tournament "Goresh", the exhibition "Rainbow of Creativity" and a concert of amateur performances (March 2017, 2018). At 23 of March 2018 at the YKSUG hosted the II Open Festival “Novruz Bayram”, which was attended by representatives of 8 universities of the Republic of Belarus: Belarusian State University, Belarusian State University of Physical Education, Belarusian State Pedagogical University named after Maxim Tank, Private Educational Institution “BIP – Institute of Law" branch of Grodno, Vitebsk branch of the International University" MITSO", Grodno State Medical University, Polessky State University and Grodno State Agrarian University. Within the framework of the festival, interactive venues were organized (national cuisine (Turkmen, Iraqi, Chinese, African), Indian painting by Mehendi henna, Chinese calligraphy and paper cutting, photo zone “National clothing of the countries of the world”, Arabic calligraphy, a short Turkmen language course, national games of Eastern countries), the tournament on national Turkmen wrestling Goresh and a gala concert. Prior to the festival, the contest of creative works of students “New Day” was held, the rewarding of the winners of which took place during the concert.

In April 2017, leaders of the community sectors conducted the career-oriented campaign of the educational institution “Yanka Kupala State University of Grodno” in Turkmenistan. As part of the action, a meeting was held between the leaders of the sectors of the community with members of the Association of Foreign Alumni of the State University named after Yanka Kupala, which discussed the prospects for interaction and areas for further cooperation, were awarded letters of thanks to graduates.

Members of the community took part in the Republican festival of foreign students “Days of the Russian language and Belarusian culture” for students in educational institutions of the Republic of Belarus, which was held at the Belarusian State University (Minsk) (May 17 - 19, 2016, 2017).

On October 27, 2017, a football tournament dedicated to the Independence Day of Turkmenistan was held with the participation of teams of students from Turkmenistan from Yanka Kupala State University of Grodno and State medical University and Grodno.

Students of the faculty of Philology Jennet Mammadova and Rovshen Ovezov received a diploma of the III degree in the Republican interactive project "Moy rodny Kut, Yak ti me Mili!". A diploma for participation was awarded to a student of the faculty of history, communication and tourism, Wei Wancheng.

The first degree diploma for the best video essay on the topic "Point of view: choice, time, opportunities" was awarded to the author's team of students of the faculty of history, communication and tourism and students of the faculty of pre-University training, which included Kan Shi, Rihanna Adams, Rita Musong, Osei Josephine Poku, Shemshat Rakhmanova, karvahal and Henri Marcelo.

Students of the faculty of history, communication and tourism Eziz Kakabayev and Eldar Islamov received the II degree diploma in the contest of quest initiatives "Vade Mecum".

A group of foreign students from Yanka Kupala State University from Azerbaijan, Turkmenistan and Bangladesh was awarded a diploma for active participation in festival events.

University stage of the festival at the Yanka Kupala State University became the creative lounge "Belarus - the crossroads of national cultures", which was organized on November 28, 2017. The event was attended by the second secretary of the Embassy of the People's Republic of China in the Republic of Belarus, Li Wanhu. A round table entitled “Unity and Diversity of National Cultures” was held as part of the creative living room, interactive venues were organized, the reconstruction of the traditional Belarusian wedding ceremony, a master class in Arabic calligraphy, a master class in Chinese calligraphy, a master class in Latin American salsa and bachata, a workshop on weaving bracelets Aladtche and the Chinese tea ceremony.

A concert dedicated to the Neutrality Day of Turkmenistan was held on the basis of the Campus on December 12, 2017.

Nikolai Idolenkov and Aziz Sheraliev, representatives of foreign students' communities, became the finalists of the Miss and Mr. University 2018 contest, which was held on December 19, 2017 and won the nomination for “Best Creative Number”.

On December 30, 2017, an excursion of a team of foreign students, who took third place in the XXII freshmen’s amateur art competition “Alma mater - first-year love”, took place in Belovezhskaya Pushcha and the residence of Santa Claus.

On the initiative of the community of foreign students, in January-March 2018, the university administration congratulated the university administration on the New Year (01/03/2018), video congratulations were prepared for university students and staff on Defender of the Fatherland Day (02.23.2018) and International Women's Day (03.03.2018). Fellowships took part in celebrations dedicated to the celebration of the 78th anniversary of the University’s birthday, participated in the contest “Selfie with a teacher”, the student’s action “Happy Birthday, University!”, The student’s party “UNIVER”, as well as foreign students prepared Congratulations on Teacher's Day (10/07/2018).

Community of foreign students participated in organizing the work of the interactive platform of the Yanla Kupala State University of Grodno "Student Karagod" in the framework of the XII Republican Festival of National Cultures, which was held June 1-3, 2018.

In the first contest of student startup projects “InnoStart”, community members Mammadova Jennet and Dzhumakov Sapa took 1st place in the “Service” nomination with the draft idea of international transport logistics: comprehensive booking and ticket purchase for foreign students, payment for medical examination for admission to the university, booking buses to the route Minsk Airport-Grodno, payment of tourist services through the university, the appointment of a responsible mentor for arriving for training.

On February 27, 2019, a meeting of the asset of the community of foreign students with the rector Irina Kiturko was held. In the format of a sincere open dialogue, students were able to offer their fresh interesting ideas, as well as discuss with the university leader all topics of concern to them. As part of the meeting, representatives of the community of foreign students were presented with letters of appreciation and letters of appreciation and souvenirs. Foreign students, in turn, presented Irina Fedorovna with an exclusive Turkmen accessory: a red bag with national patterns.

As part of the festival, interactive venues were organized where guests of the event plunged into the national flavor of other nations.

Students from Azerbaijan treated everyone with baklava, jam, homemade sugar. As the guys said, the main feature of these sweets is that they are all made with nuts. It was also possible to taste dolma, pilaf, and “holy food” sumialek. According to students, traditionally it’s made from wheat. Students noted that preparations for Novruz begin a few weeks before the holiday, and the first thing is decided to grow this indispensable attribute of the festive table. According to Azerbaijani beliefs, sprouted wheat is a symbol of spring, fertility, prosperity and prosperity.

On the site of students from Turkmenistan, everyone could taste manti, chak-chak, samsa and pilaf, and Kupalians from Iraq treated guests to brian stuffed with rice, onions and pasta, chicken, as well as national soups.

The guests were able to see the household utensils of other nations and even try on national costumes at the exhibition “Rainbow of Creativity”. For example, students from Tajikistan brought a wedding dress made of special material and embroidered with symbolic patterns. Traditionally, tailoring is done exclusively by hand.

Sports enthusiasts were united by a tournament in the national Turkmen wrestling goresh. This is one of the varieties of wrestling on belts, which has its roots in ancient times. In historical sources, there are reports that among the ancestors of Turkmens, not only men, but also women possessed the methods of struggle. In bitterness, wrestlers need to earn points, forcing the opponent to touch the carpet with any part of the body except the feet.

The festival ended with a concert, during which foreign students continued to acquaint the audience with their culture through creative numbers.

An interactive round table “Calendar of National Holidays” was held at the festival, during which the participants discussed the traditions of national holidays, their history, national dishes, clothes and traditional games in a discussion format.

The program of the creative lounge included the intellectual game “Brain Ring” on the theme “This wonderful world is Belarus!”, at which university teams answered questions on geography, culture, traditions, famous personalities of Belarus and other nationalities.

The day ended with a concert “Polyphony of National Cultures”, the program of which included creative numbers of foreign and Belarusian students studying at Belarusian universities. Competition winners will also be awarded at the concert. Among them are the distance essay contest “Love for the Homeland - in each of us” and the contest “Emblem of a creative living room”.