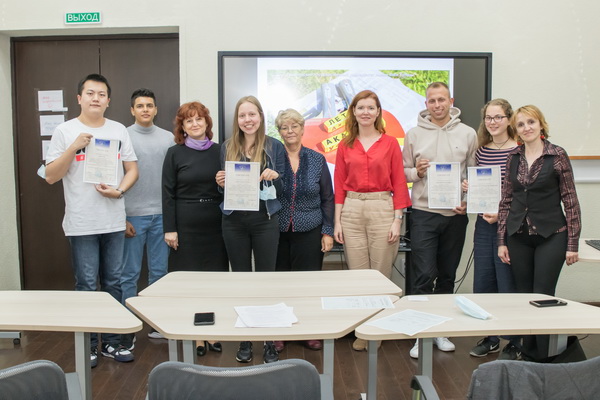 For two weeks, foreign guests from Germany, China and Sweden not only studied Russian, but also conducted research in the field of applied linguistics. On Friday, August 27, the participants of the Summer Academy defended their scientific projects and received certificates.
The result of the implementation of the educational program at the Summer Academy was the preparation of linguistic projects and their defense. Students of the Russian language under the guidance of teachers of the Department of Language training of Belarusian and foreign citizens for two weeks studied the nominations of shops in Grodno and the nominations of public catering dishes in Grodno in semantic, component and etymological aspects. After the training, the students presented their projects to the expert commission and told about the results of the work done in Russian.
– All the students demonstrated not only a high level of mastery of the Russian language, but also formed skills of independent research work. The projects that were prepared by foreign students in two weeks, according to the degree of study of the material, correspond to a good course work, on which our students work throughout the academic year. This shows that the students are motivated, they approached the research work very seriously, with a high degree of responsibility – " said Inna Samoilova, head of the Department of Language Training of Belarusian and Foreign Citizens.
The guys also shared their impressions about the experience they received at the Yanka Kupala State University.
Yang Cheng from China is a 3rd-year student of BSU, majoring in "World Economy", has been studying Russian for two years:
– While studying at the Summer Academy, I gained useful experience in conducting scientific research, because in the new academic year I will have to prepare a course work. Every day, for two hours in the classroom and then for two hours on my own, I was engaged in research of the nominations of stores in the city of Grodno. It was also very interesting to communicate with other participants of the Summer Academy-representatives of Sweden and Germany. It was also important for me to get acquainted with the city of Grodno, because I didn't know anything about it before.
Russian Russian teacher Eric Malmgren from Sweden, who works as a tour guide, said that before coming to Belarus, he studied Russian only online:
– It was important for me to plunge into the language environment, so I studied at the Summer School of the Russian Language, and then stayed at the Summer Academy. At the Summer Academy, he devoted a lot of time to completing homework and research work. I didn't have enough time to go to the zoo or to the cinema, but I think that I have significantly improved my Russian.
Future ecologist Marlene Westeker from Germany took online training at the Summer School of the Russian Language this summer, and then came to Grodno and continued studying the great and mighty within the walls of Kupala University at the Summer Academy:
– I think that each of us has improved his Russian during his studies at the Summer Academy and learned a lot about Belarus, Grodno, and the university. My expectations from the training were met. If there is an opportunity, I will come here again next year.
The teachers received feedback from the project participants. The students told what they liked most during the training, expressed their wishes and shared their plans. The event ended with the presentation of personal certificates.
Help:
The Summer Academy of the Russian Language at the Yanka Kupala State University was organized for the second time. In the period from August 15 to 28, 2021, foreigners studied the Russian language and conducted research on applied linguistics. In addition, they were offered a cultural program that helped them to fully immerse themselves in the language environment.
The project was organized by the Department of Language Training of Belarusian and Foreign Citizens of the Faculty of Pre-university Training.

More in this category: « Students of Yanka Kupala State University of Grodno can have lunch in the canteens of the University at a discount Nuremberg gingerbread, German sausages, Swedish sweets, Polish waffles, pancakes with cottage cheese and honey: an international evening brought together the students of the Summer School of the Russian Language »
back to top