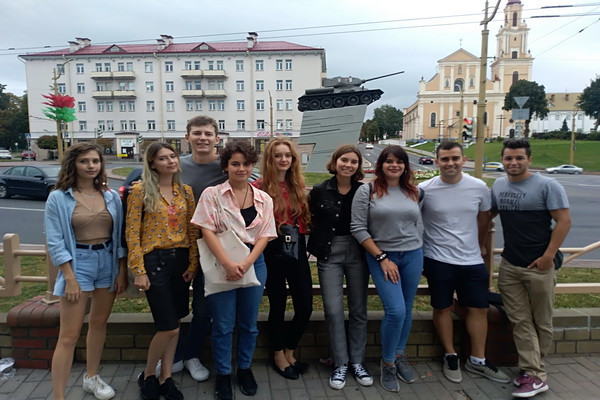 Students from the University of Alcalá (Spain) and the University of Gdansk (Poland) will study at the Yanka Kupala University during one academic semester. In the first days of September, the Center for Internationalization of Education, together with ESN YKSUG Club of Youth Student Initiatives and university departments, organized an adaptation week for foreign guests. Students were told about Kupalovo University, its structure, they met with teachers and students with whom they were to study together, learned the features of the educational process. A cultural and entertainment program was also organized for foreign guests. So, they played several football matches with Belarusian students, took part in a bike ride in the forest park “Pyshki”, and took an excursion along the streets of Grodno. As students from the University of Gdansk noted, studying at our university under the academic mobility program will allow them not only to improve their professional competencies, but also to plunge into the environment of the Russian language they study. In turn, students from the University of Alcala said that it would be useful for them to get new knowledge in computer engineering, as well as learn more about the culture of Belarus, which is significantly different from the Spanish.

More in this category: « Faculty of Biology and Ecology of Yanka Kupala State University and Institute of Engineering and Technology (Ulaanbaatar) plan to develop joint research projects
back to top