PHOTO-FACT: Winners of the XXV University – wide competition "Alma mater-love from the first year" were awarded

PHOTO-FACT: Winners of the XXV University – wide competition "Alma mater-love from the first year" were awarded 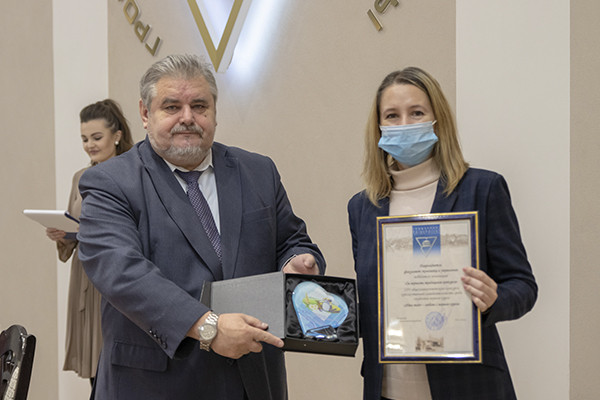 The award ceremony at Kupala University was held on November 26 at the Council for Ideological and Educational work.

The final of the anniversary competition "Alma mater-love from the first year" was held online for the first time. The names of the winners and prize-winners in different categories were announced live on the international student day. We remind that the main award this year is given to the team of freshmen of the Faculty of Innovative Mechanic Engineering of Yanka Kupala State University of Grodno. 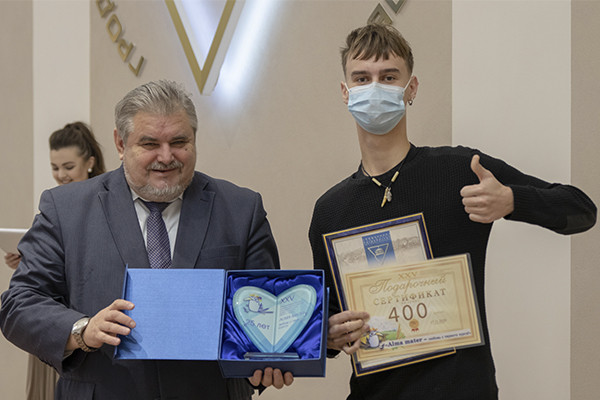 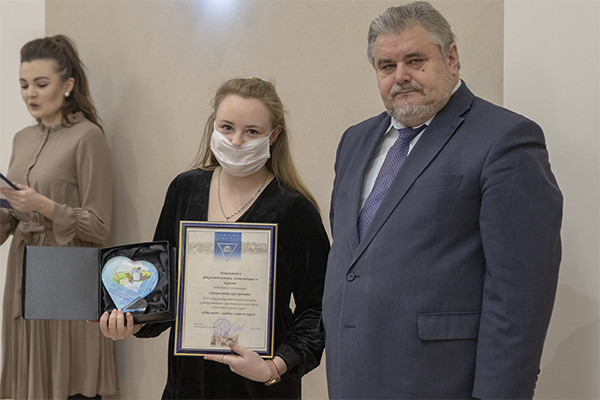 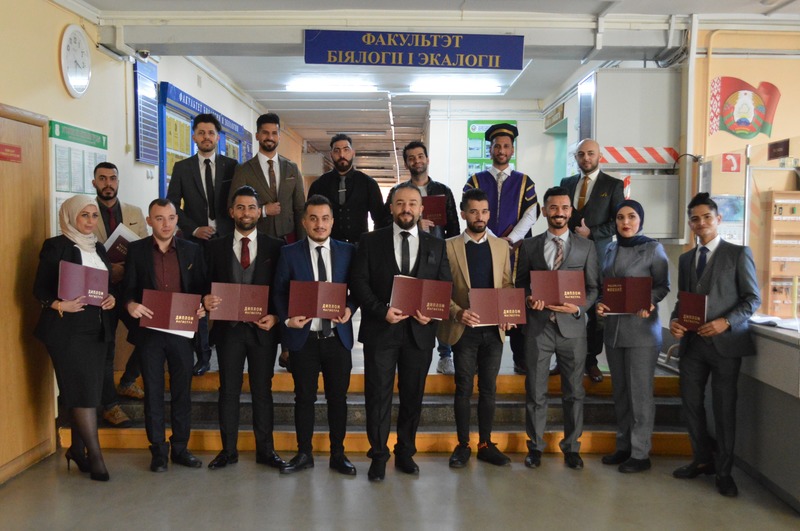 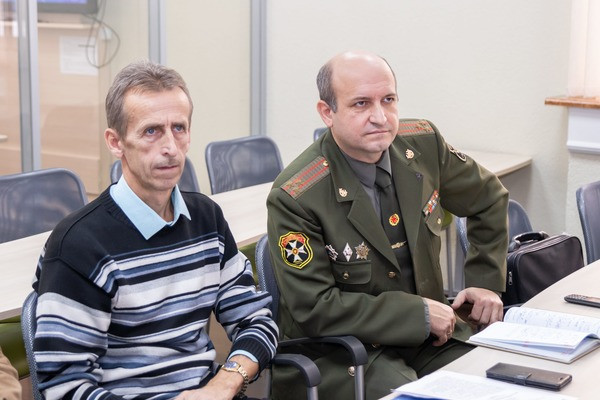 The scientific forum was held at the Military Faculty of Kupala University on November 18-19.

The online conference was attended by researchers, teachers, practitioners, doctoral students, postgraduates and undergraduates from Belarus, Russia, Kazakhstan, Ukraine, China and Latvia. During the event, pedagogical issues aimed at improving the methods of teaching disciplines in higher education institutions, developing physical culture and sports, improving ideological and educational work in universities, and Patriotic education of young people were discussed. The issues of the history of military personnel training were discussed separately. The conference proceedings were published in advance. In total, the collection includes 130 publications.
The XII international scientific Internet conference "Improving the system of personnel training in higher education: directions and technologies" was held by the Department of theory and organization of physical training of military personnel of the Military Faculty of Yanka Kupala State University. The organizers were also the Northern (Arctic) Federal University named after M. V. Lomonosov and the Higher school of psychology, pedagogy and physical culture. The event was supported by the Ministry of education of the Republic of Belarus.

Alina Lukashevich, a student of Kupala University, became one of the 50 finalists of the Gromyko competition for young international students of the CIS

Alina Lukashevich, a student of Kupala University, became one of the 50 finalists of the Gromyko competition for young international students of the CIS 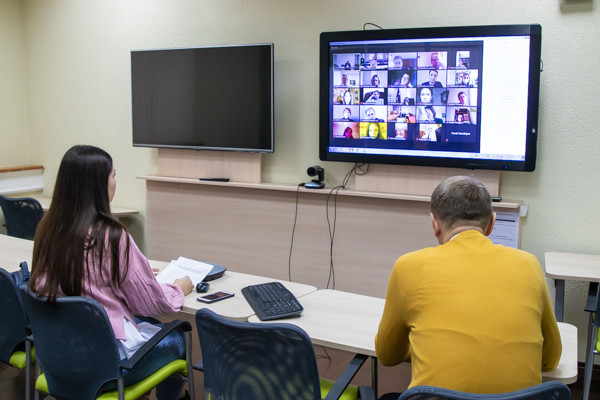 A student of the Faculty of History, Communication and Tourism of Yanka Kupala State University took part in the Forum of Finalists.
A total of 285 scientific articles from 323 researchers were accepted for the Competition. The finalists were selected by a jury consisting of more than 30 experts from 6 CIS countries. The forum of finalists, which was held online on November 18-20, brought together students, undergraduates, postgraduates, young scientists and diplomats under 35 years of age from ten countries.
Alina Lukashevich, a 2nd-year student of the specialty "Sociology" at Yanka Kupala State University, made a report "The Republic of Belarus and the Russian Federation: main directions, trends and scales of external labour migration". The research was carried out under the scientific supervision of Nikolay Myslivets, head of the Department of Sociology and special sociological disciplines of Yanka Kupala State University.
The program of the three-day Forum also included panel discussions on the future of Eurasian integration, the activities of young scientists and the role of the peoples of the USSR in the victory over Nazism. The Forum participants were given lectures on "General assessment of the situation in the world and Russia's foreign policy", " Stalin-Roosevelt-Churchill: the role of the leaders of the "Big three" in the fight against fascism".
The Forum of finalists of the CIS young international students Competition was organized by the Gromyko Association for foreign policy studies, the Academy of Public Administration and The Institute of Europe of the Russian Academy of Sciences. 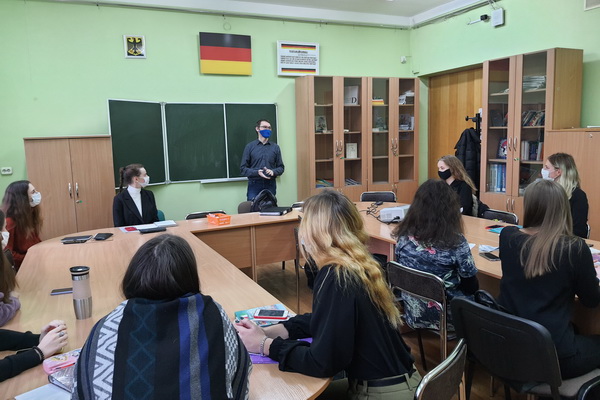 As part of the educational visit of "Visiting Professor" program, the guest of honor met with students and teachers of the Department of Romano-Germanic Philology.
As part of the admission program, on November 23, Maximilian Dener gave a lecture on "Modern ways of translating specific syntactic constructions of the German language into Russian" and conducted a practical lesson on "Linguistic and Cultural translation units in intercultural communication" for students of the Faculty of Philology. The guest of honor spoke about the opportunities for training and academic exchanges of students, undergraduates and postgraduates in educational institutions in Germany, academic exchanges of employees and teachers, as well as research on the basis of educational institutions in Germany.
Students of the specialty "Romano-Germanic Philology" also participated in language testing to determine the level of foreign language proficiency.
At the end of the meeting, Maximilian Dener noted that he would like to visit Kupala University again next year for a joint Republican event. 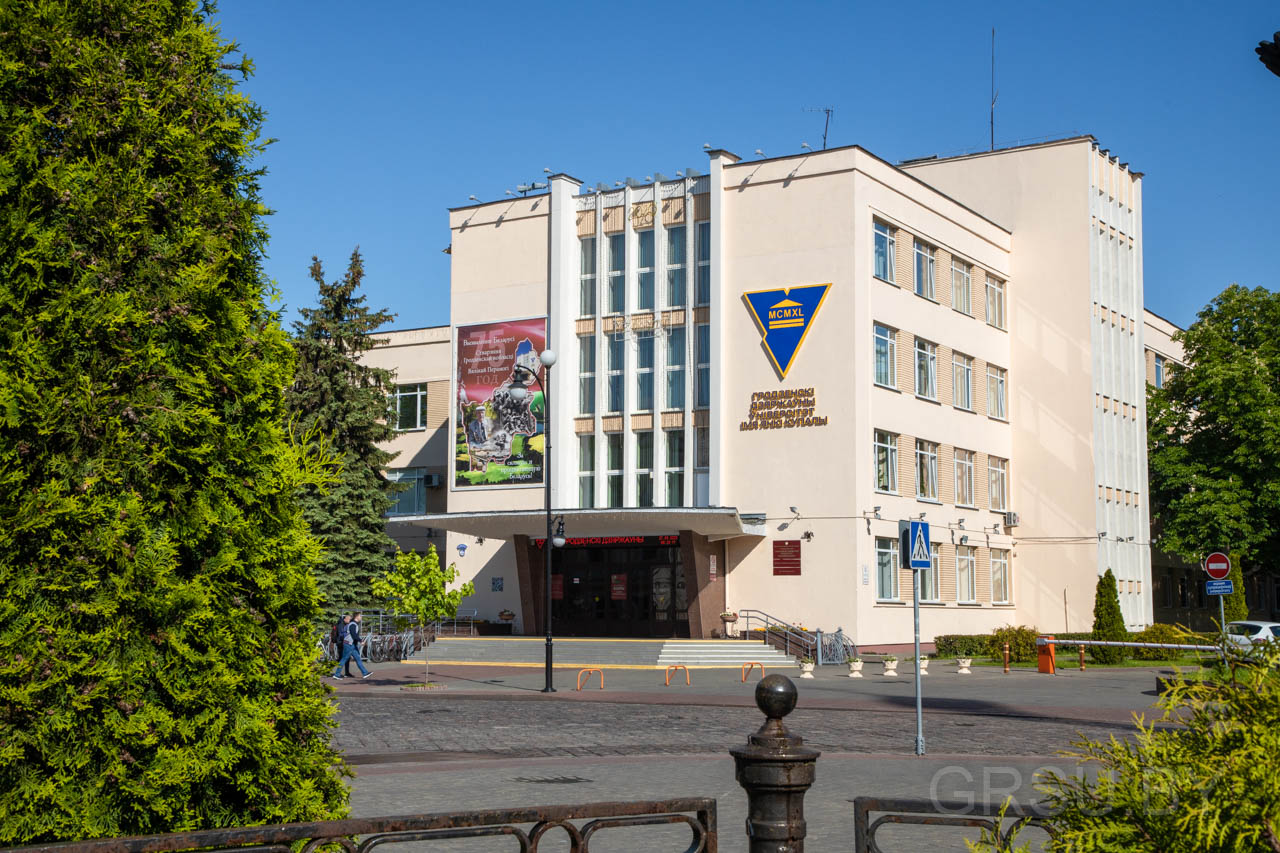 Everyone can offer their vision of the symbol of Kupala University.
The competition is organized by the Coordinating Student Council together with the Department of Educational Work with youth. The competition is aimed at developing and strengthening the corporate culture and corporate values of the University, improving its image, and developing the creative abilities of Kupala residents.
To participate in the competition, you must fill out an application by December 15, 2020 and send it along with the competition materials to the email address This email address is being protected from spambots. You need JavaScript enabled to view it.
The graphic image of the mascot must be presented in electronic form as a complete color drawing made in any technique, including computer graphics. In addition, the author must attach a brief explanatory note to the application, revealing the creative idea, as well as their suggestions regarding the name of the mascot.
You can find more information about the terms of the contest here. (https://www.grsu.by/images/Documents/24446_1.pdf) 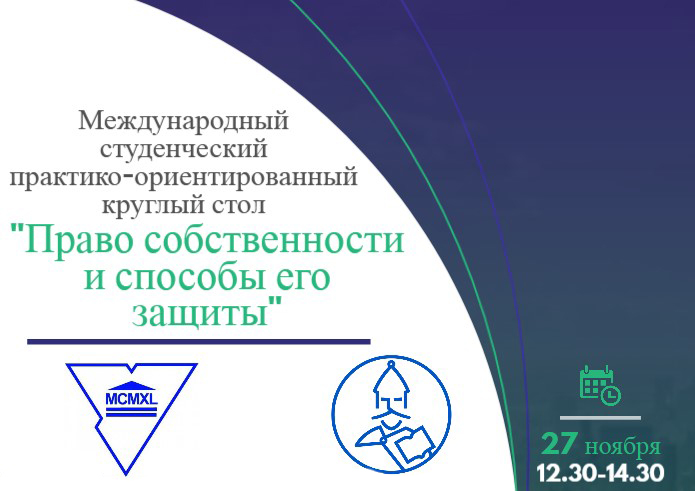 The dialogue will take place on November 27 as part of the III international student practice-oriented round table "Property Rights and ways to protect them". 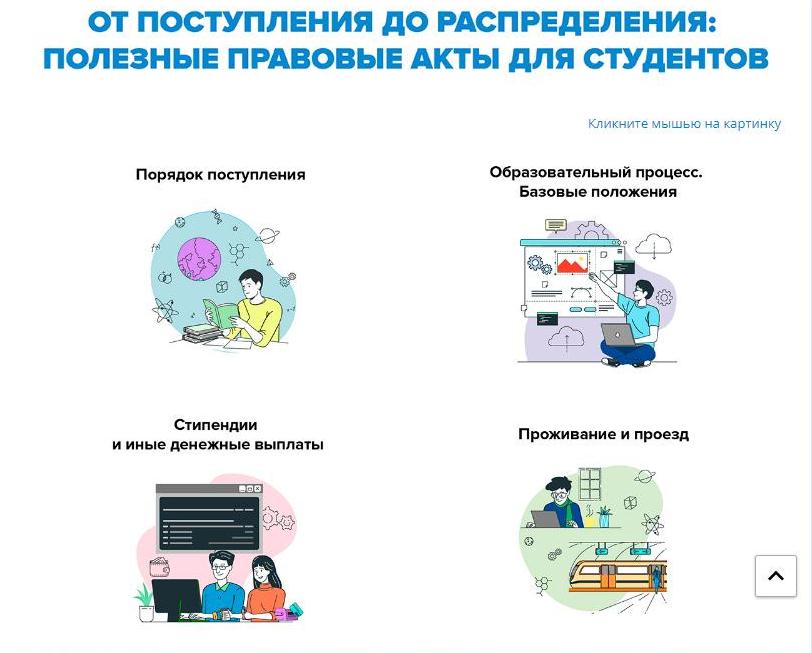 The legal guide to student life was developed for the International student day.
The founders structured and gave basic legal information about how to regularise the educational process and educational relations in the Republic of Belarus, which conditions and safeguards enshrined in law for the professional development of young people, as well as their full personal development.
The design of the resource "From admission to distribution: useful legal acts for students" provides for the use of interactive infographics. By clicking on a particular icon, students or applicants get access to a selection of basic legal acts on admission to an educational institution, practical training and certification, distribution and redistribution, assignment of scholarships and other monetary payments, provision of a place in a hostel and travel privileges, and obtaining education on a paid basis. A separate section is devoted to getting education in our country by foreign citizens.
Users of the resource can participate in the discussion of legal regulation in the field of education, as well as make suggestions for its improvement 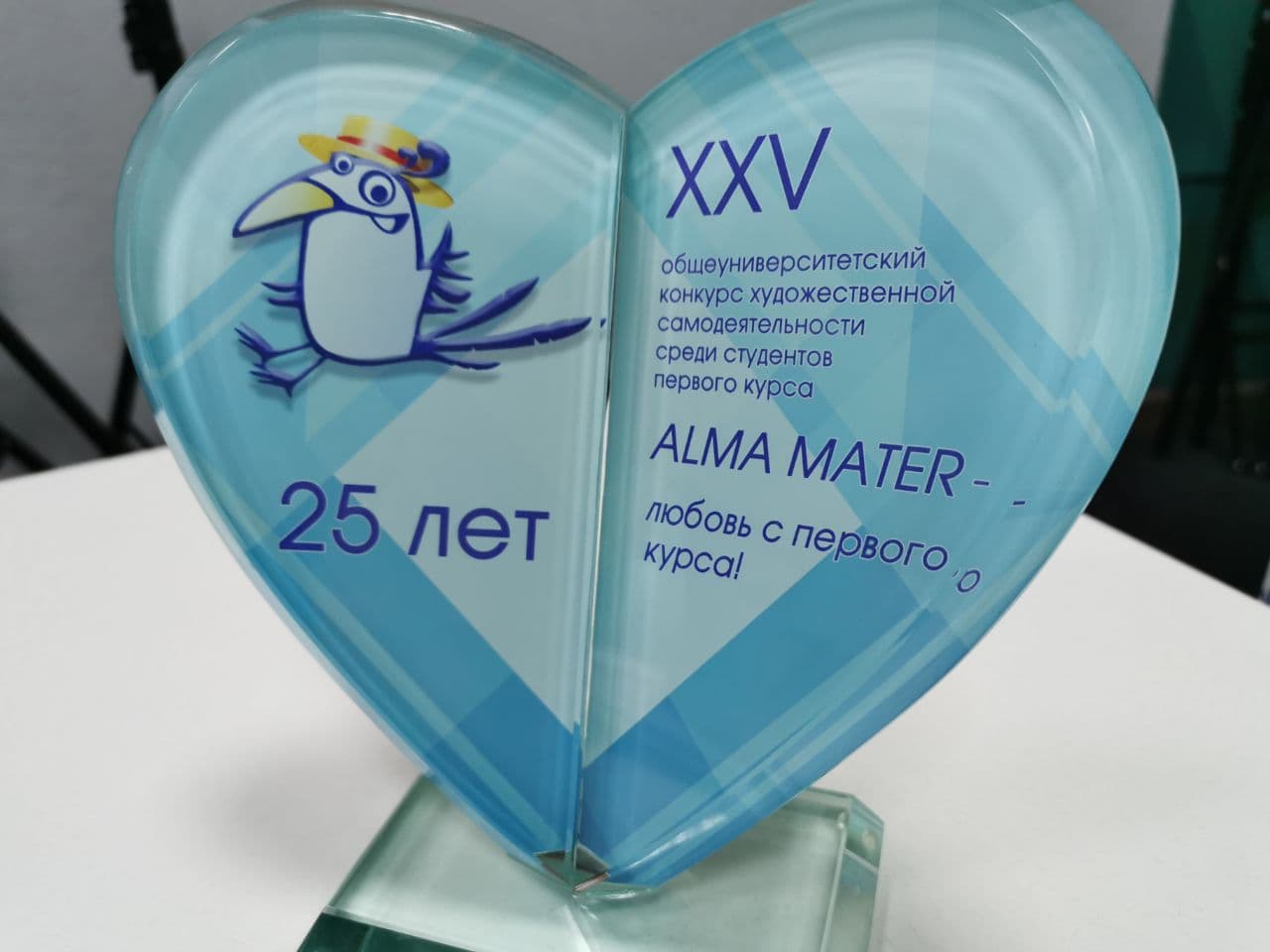 The results of the amateur art competition among freshmen of Kupala University were summed up on the International student's day. 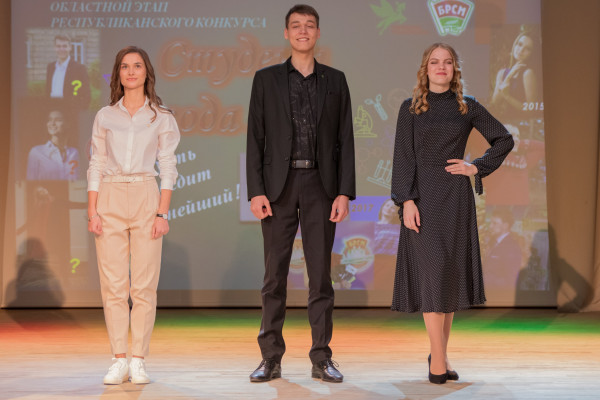 The final of the regional stage of the competition was held in the concert hall of the Grodno city house of culture on November 12.
Supported by a standing ovation from their support groups, 3 active and initiative students claimed the title of the best in the region on the stage that day. This is a 2nd year student of the Faculty of Philology of Yanka Kupala State University of Grodno Andrey Dunko, 2nd year student of Engineering-Technological Faculty of Grodno State Agrarian University Olga Furman, and 5-year student of the Medical Faculty of Grodno State Medical University Anastasia Hliupina. Earlier, the students won local tours that were held at three universities in Grodno.
The jury consisted of Secretary of the Central Committee of the Belarusian Republican Youth Union Yulia Zinkevich, second Secretary of the Grodno Regional Committee of the BRYU Andrey Esin, winner of the regional stage of the contest "Student of the year-2019" Artem Nesteruk, editor of the TV and radio company "Grodno" Yulia Novikova and Head of the Department of Organizational and Public Work of the Grodno Regional Association of Trade Unions Nadezhda Stepuro.
As part of the first contest, which was traditionally called "visit card", the students talked about their hobbies and achievements, and plans for the future. In the public speaking contest, participants demonstrated their skills in public speaking. A teacher, a doctor, a technology engineer-future professionals in various fields shared their thoughts about the chosen professions with the jury and the audience. The next stage of the competition was the video contest "I am a student/Uni", after which the jury was able to ask the participants a few questions, evaluating the erudition of the students and their ability to stay on stage during the intellectual competition.
The competition marathon ended with bright and creative performances, during which the contestants sang, danced, and recited poems.
Anastasia Hliupina, a student of Grodno State Medical University, became the "Student of the year – 2020" within the regional stage of the competition. The girl will represent the Grodno Region in the final of the competition in Minsk. The winner in the category "Student of the year – 2020 online" was a representative of Grodno State Agrarian University Olga Furman. By the way, the best support group was also recognized as the team of this university.